The Casa da Música is a concert hall in Porto whose construction began in 1999 so it could be included in the various projects presented for the European Capital of Culture in 2001. Unfortunately, it wasn’t completed until 2005.

This avant-garde structure is one of the city’s most emblematic symbols, especially of the modern part.

Porto’s major concert hall is situated in Boavista, close to the Praça Mouzinho de Albuquerque, which is also known as Rotunda da Boavista. This large square houses a garden with pretty areas where you can rest.

In the middle of the square is an eye-catching sculpture that stands 45-meters tall. The monument, which is crowned by a lion on an eagle surrounded by soldiers on horseback commemorates the victory of the Anglo-Portuguese Alliance against Napoleon’s troops. 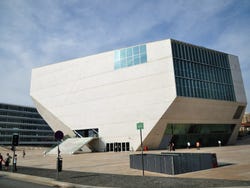