Winter and summer in Porto

The wettest period is between November and March, but during the rest of the year, rain is less common.

In winter, temperatures never drop below 40ºF (5ºC) and maximum temperatures usually vary between 55ºF and 61ºF (13ºC - 16ºC). Although winters are generally mild, strong winds occasionally blow due to the Atlantic depressions.

In September, October, April and May, the mornings are usually overcast and the afternoons sunnier. We recommend you bring something warm, since at night the temperatures can drop significantly.

Since Porto has a temperate oceanic climate, any time of year is good to visit. However, we prefer the months between April and October, as at this time of year it's unlikely to rain. 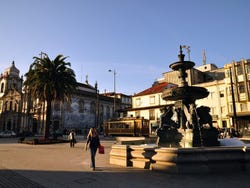