The Casa do Infante (Prince’s House) is an important landmark in Porto. First established in 1325, it was given this name after Prince Henry the Navigator was born here in 1394. Prince Henry was an important figure during the Age of Discovery.

The Casa do Infante was the only royal building in Porto and it is where the royal family’s guests would stay during their official visits. Nowadays, it has been transformed into a small museum that features an archaeological site and the mosaic floors that once decorated the structure, since the house has been rebuilt and remodelled on numerous occasions right up until the twentieth century.

The historical house is situated very close to the riverbed, in Ribeira.

The interior of the Casa do Infante is a little bare, but since it's one of Porto’s most important historical buildings, you might find it interesting.

Another downside is that the explications throughout the museum are all in Portuguese, although you can ask for a pamphlet with information in English. 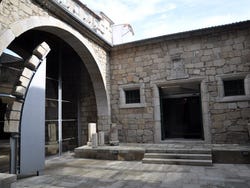