The building was constructed mid-nineteenth century in a neoclassical style and is situated in the city centre, next to the St Francis Church. This historical building was in fact established on the ruins of St Francis Convent after it was burnt down during the Liberal Wars. The Palácio da Bolsa was built in 1842 but it wasn’t opened until 1891.

Inside this neoclassical National Monument, you’ll visit the large central courtyard called Pátio das Nações (Courtyard of the Nations), enclosed by a glass structure which lets in a beautiful natural light into the whole Palace.

Afterwards, you’ll be taken up an impressive marble and granite staircase and explore the Golden Room, which is covered with gold-leaf, the General Assembly Room, completely decorated in wood and other splendid rooms until you get to the Palace’s highlight, the Arab Room. This 300-metre sized room is decorated in Moorish style, inspired by the Alhambra and is where the official receptions are held.

The Palácio da Bolsa is one of the most interesting landmarks to visit in Porto. We recommend joining the half-hour guided tours, which include very interesting information about the Palace and the history of Porto.

The guided tour exists in four languages and the person that gets there first and purchases the ticket first, chooses the language of the guided tour, so we recommend you get there early. 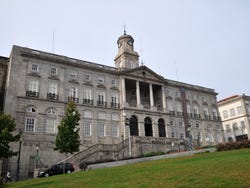 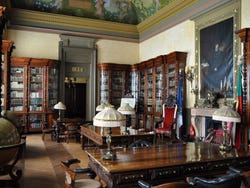