The Franciscan Order established the Church of São Francisco in 1245. It was initially a small church and convent, which in later years was altered extensively. In 1832, a fire destroyed a part of the temple and in its place the Stock Exchange was built.

Even though the church’s origins are Romanesque, it was later transformed into one of the most prominent examples of Gothic architecture in Porto, as well as bearing some elements of the Baroque style.

São Francisco has three naves coated in golden carvings. It is believed that over 300 kilos of gold dust were used to decorate the church’s interior. The temple’s ornamentation was for a time considered too extravagant for the poverty that surrounded it, so it was closed for a few years.

One of the most beautiful altarpieces of the Church is located in the North aisle. The “Tree of Jesse” is a wooden sculpture by Filipe da Silva and António Gomes depicting the family tree of Jesus, considered one of a kind.

Under the Igreja de São Francisco lie the catacombs, where the Franciscan monks are buried and members of Porto’s wealthiest families. The catacombs also house an ossuary with thousands of human bones, which you can admire through a glass floor.

The Church of São Francisco is one of Porto’s most prominent monuments, along with the Cathedral and the Clérigos Church. You can also take the time to visit the Palácio da Bolsa, a marvellous example of nineteenth century Neoclassical architecture. 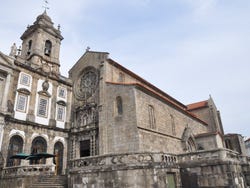 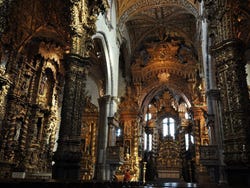