Lunch (called “almoço” in Portuguese) is usually at around 1pm and dinner (jantar) around 8 pm. Make sure not to go to the restaurants too late, otherwise, you’ll find that the kitchens are closed.

Porto has a very varied gastronomy and some dishes will truly tickle your taste buds.

Since Porto is so close to the Atlantic Ocean, one of its star dishes is fresh fish, including the renowned “cod”, which is prepared in various ways. Another typical dish is the “Tripas à moda do Porto”, a stew of beef stomach and white beans. When the Castilians attacked Portugal in the fourteenth century, the people of Porto were left with little food and were obliged to eat animal organs and this is why the inhabitants of Porto have the nickname Tripeiros. Another tasty traditional dish is the “Francesinha”, a filling sandwich with ham, sausage, veal, egg and a rich sauce made with beer. It is always served with chips.

The people of Porto, like Lisbon, are experts in soups and you’ll find brews of all types and flavors. The city even has fast food restaurants that only serve soups and even McDonalds sells several tasty soups.

Pastries, in general, are extremely good in Portugal. One of the most popular is the “Pastel de Nata”, a delicious custard tart pastry, similar to the famous “Pastel de Belém”, from Lisbon.

You can accompany some dishes with a good Porto wine.

Be careful with the aperitifs

Most restaurants in Porto serve you aperitifs while you wait for your dish to come out. These aperitifs are charged apart, so make sure to ask the waiter to remove them if you don't want them to charge you extra. Waiters now often warn you, so there is no confusion when the bill comes.

Portions in Porto’s traditional restaurants are very large and some places even offer the option of ordering half-portions.

Best areas to eat out

One of the liveliest areas to eat out is Ribeira. The river bank is packed with charming little restaurants, where you’ll be able to sample Porto’s traditional cuisine while you admire the magnificent views of Gaia lit up, the Douro and Dom Luís I Bridge. 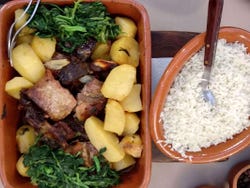 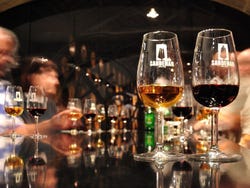 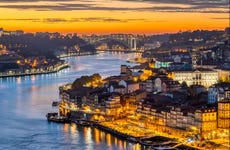 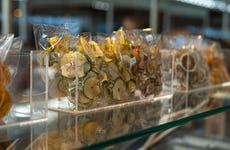