Porto has proven to be a source of inspiration for numerous artists: discover some of the city's most emblematic works of street art on this free walking tour. 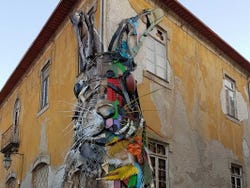 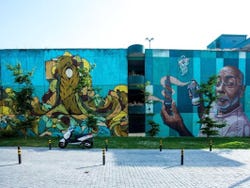 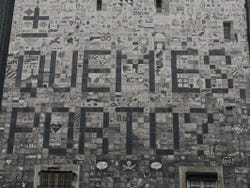 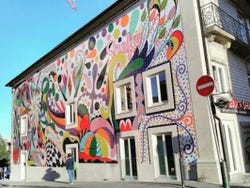 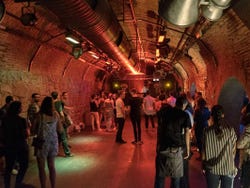 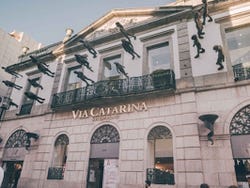 Just a few steps from the meeting point, we'll reach the Steak n Shake Restaurant, where we'll get to admire a colourful tile mural by Joana Vasconcelos. Next, we'll see a spectacular 150-square-metre painting of Don Quixote and Sancho Panza.

Our next stop will be a step back in time, admiring the 20th century advertisement posters at the Café Candelabro. Afterwards, we'll head to the avant-garde Trinidade Station, where we'll stop to take in an impressive mural by MrDheo and Hazul Luzah.

Porto's extensive street art is also represented at the Mercado do Bolhão, which we'll visit next before heading to the nearby Chapel of Santa Catalina. This 18th century church is famous for its striking tiles.

We'll continue on our free walking tour to the Via Catarina Shopping Centre, where you're sure to be captivated by the curious figures on its façade and the "Who are you, Porto?" mural. Our tour will then take us to Club Gare, an electronic music club, and to see two of the most impressive paintings on Rua das Flores.

Later, we'll reach Ferreira Borges Market and explore the streets around the Gaia quay, before stopping in front of one of the most iconic pieces of urban art in Porto: the Half Rabbit. Our tour will come to an end here after three hours, on the corner of Rua Guilherme Gomes Fernandes.

Free tours do not have a fixed price, rather each person offers the guide the amount they consider appropriate, depending on their level of satisfaction.

All of our providers comply with recommendations to avoid the spread of Covid-19. Please check local restrictions before traveling. Show more

Handing out of printed material such as maps or brochures will be avoided.

It is mandatory to present a complete vaccination certificate. The vaccine must be accepted in the country of activity.

Showing your voucher on your phone will be enough, and it is not necessary to print anything.

The activity takes place with a guide that speaks in English.

You can book up until 1 hour before the activity as long as there are still places. Book now to guarantee your spot.

All services published on Civitatis are carried out in accordance with our Sustainability Code.

If you are not able to attend the tour, please cancel your reservation, otherwise the guide will be waiting for you.

Where does the activity end?

Where does the activity end?

ÌThe guide Jamie was very knowledgeable. Tour was good except it was late on a rainy day, cold and got very wet even with raincoat and umbrella. Days restrictive as not every day., so next tour would have been when we leave Porto.

I travelled with friends
10

I travelled with my partner
10

The walking tour was very insightful, interesting and fun! We spent a nice two and a half hours on the tour while we learnt so much about Porto!

I travelled with my partner
10

The tour was really great. Our guide Adriano was very knowledgable and made the tour really interesting. It was a great way to see Porto and to hear some fun facts about its urban art

I travelled by myself
10

The tour guide was very knowledgeable and it was a great experience overall. Definitely recommend this tour to everyone that wants to see Porto in a different way.

I travelled by myself
Show all the reviews
like

9.60 / 10 16,552 reviews
Let yourself be seduced by Porto’s charming streets and colorful buildings while you wander through its nostalgic historic center.
Free!
Book
like

9.80 / 10 60 reviews
On this tour you'll explore the Paiva River and its famous walkways. Also, you'll walk the longest pedestrian bridge in the world! Ready?
US$ 96
Book
like